Attalaki participates in the work of the UK International Ministerial Conference on Freedom of Religion or Belief.

The UK government hosted an International Ministerial Conference in central London on 5th and 6th July, bringing together governments, parliamentarians, faith and belief representatives, and civil society organizations from around the world to discuss the challenges facing religious freedom to identify means to address religious persecution and discrimination worldwide, promote greater respect and preservation of religious liberty, and to urge increased global action on Freedom of Religion or Belief (FoRB) for all.

Attalaki presence at the UK Ministerial Conference by the invitation of the Foreign, Commonwealth and Development Office, was a great opportunity for our organization to share our vision, goals and ideas for the promotion of these fundamental rights, with a large number of decision makers, religious leaders and organizations similar to ours; it was also an occasion to discuss the current challenges facing the FoRB in Tunisia. In this context, our delegate Ghassen Ayari, public relations and partnerships officer of Attalaki,  met with several personalities such as Archbishop Dr. Samy Fawzy, Archbishop of the Episcopal/Anglican Province of Alexandria and Bishop of the Diocese of Egypt, and His Excellency Sam Brownback, former US Ambassador for Religious Freedom and member of the Republican Party and former United States senator, and Mr. Thomas Farr, President of the Institute of Religious Freedom, and the first director of the State Department’s Office of International Religious, and Dr. Mohamed El-Sanousi, Director of the Washington DC Office of the Network for Religious and Traditional Peacemakers in which Attalaki joined as a full member January of this year, for more concrete actions in the MENA region on subjects related to the FoRB.

Within the fringe events to the UK Ministerial Conference, and by an invitation from the Institute of Religious Freedom and Refcemi Foundation, Ghassen participated as a panelist on the 7th of July in Westminster Central Hall, together with Archbishop Samy Fawzy, Primate of the Anglican Province of Alexandria and Dr. Nayla Tabbara, President of Adyan Foundation and Mr. Salah Ali General Coordinator Iraq Religious Freedom and Anti-discrimination Roundtable, and Mr. Jeremy P. Barker Director, Middle East Action Team in the Institute of Religious Freedom, to discuss the positive developments in the Middle East and North Africa on Freedom of Religion or Belief and to identifying further steps and opportunities.

The reality of religious minorities in Tunisia:

Mr. Ayari says in his intervention; Tunisia is usually presented as ethno-religiously homogenous when compared to other countries in the region; its minorities have long undergone a process of invisibilisation and/or assimilation into the dominant Arab-Muslim identity. This image has been continuously promoted by the successive Tunisian governments since independence in 1956 which put the country’s religious minorities in a position of second-class citizens.The Tunisian Revolution of January 14, 2011, gave birth to the 2014 new Tunisian Constitution that guarantied many key civil, political, social, economic, and cultural rights, such as the freedom of belief and conscience and the practice of religious rites, according to Chapter 6 of the Constitution.

However, there are existing restrictions implemented that favor Islam as the official religion of the State. For example, the presidential seat is exclusive to Sunni Muslims as mentioned in Chapter 74 of the same Constitution, in addition to the efforts that the State should implement and emphasize to consolidate the Arab-Islamic identity among children and youth (chapter 39).

Moreover, Tunisia is seen as a pioneer in the Arab world since the adoption of the Code of Personal Status in 1956, most notably including the abolition of polygamy, forced marriages, and repudiation.

Although 12 years have passed since the outbreak of the popular uprising/revolution of 14 January 2011, which toppled the regime of Tunisian President Zine El Abidine Ben Ali, the question of managing diversity and pluralism within Tunisian society remains among the biggest challenges that have not been resolved to this day, in addition to The situation of religious minorities in particular and religious freedoms in general, as the state continues its policy of ignoring and turning a blind eye to these issues despite their importance in determining success measures for any democratic transition.

The state’s policy has been limited to the security character whenever it comes to Jewish and Christian community (mainly the Catholic Church which enjoys an official agreement between the Vatican City and the Tunisian Republic called ‘Modus Vivendi‘ that regulate relations between Tunisian governments and the Catholic Church), without serious consideration of taking concrete measures in regard to the other minorities in the country.

On another hand, other communities are even not recognized at all, such as the Tunisian evangelical churches, the Shiite Muslims, Baha’is or the other religious communities, by not recognizing those communities we are mainly speaking about the absence of places of worship or even worse as the total absence of cemeteries, the formal interdiction of founding associations of cultural nature and in some cases (like for Baha’is) official documents of the State accused them of apostasy and conspiracy for international organization and foreign states.

Tunisian governments since the independence do not collect data on its population disaggregated by religion and/or ethnicity, which made the situation more challenging as there are no official figures, statistics, or studies that give a clear picture of the religious map in Tunisia, especially the data related to the numbers of members of religious minorities.

In a sarcastic way we can conclude that the efforts made by Tunisian governments to be limited to seasonal occasions such as the Jew pilgrimage to the Ghriba synagogue, where political and media attention is limited to security efforts that work to “ensure its success” with the aim of political use on the international scene to give the image that successive governments have been promoting of Tunisia as a land of tolerance and acceptance of diversity.

Achievements and opportunities to consolidate religious freedom and coexistence:

On the contrary, and as an attempt to tackle contemporary issues, one of the most important initiatives that echoed inside and outside Tunisia was the announcement of the signing of the National Charter for Peaceful Coexistence. Attalaki Organization supervised the preparation and signing of the Charter, after a great work that lasted for three consecutive years in which the majority of the religious components in Tunisia were gathered at one table, especially those unrecognized by the state, where many basic issues of public concern and religious-related issues in Tunisia were discussed.

In this context, Attalaki organization has been founded in 2016, the main focus at that time was advocating for a diverse society, one that has a representation of multiple religious groups and their respective cultures and traditions. Today, we are considered to be the leading organization in Tunisia working on the topic of religious freedom and a key voice in defending the rights of religious minorities and making their voices heard.

In order to achieve these objectives, our partnerships have been expanded nationally and internationally with governmental and non-governmental actors, as well as incubating multiple conferences, trainings, workshops, and advocacy campaigns that covered almost all regions of the Tunisian Republic.

In the context of these efforts from our organization and in continuous communication with state institutions, including Parliament and the Ministry of Religious Affairs, the establishment of a special department for religious minorities affairs in the Ministry of Religious Affairs was officially announced, following a national symposium held by the Attalaki Organization on March 23, 2021, with a wide presence of religious leaders, International organizations, and official participation of parliament and government representatives.

Challenges to religious freedom and minorities:

These initiatives are only the beginning of a long-term process in order to achieve positive change within society and state institutions in which religious, intellectual, racial, and ethnic diversity and pluralism are taken into account; and pave the way for the existence of a real ground in which all these components coexist in peace, love, and tranquility that guarantees all their rights and freedoms within the framework of a democratic civil state in which the state is based on the supremacy of Law and respect for human rights that are categorical with all attempts to go back to before the revolution of January 14, 2011.

But today Tunisia is facing a new reality marked by uncertainty, ambiguity, and mistrust between most of the political and civil components in the country, especially after the end of the revolution’s Constitution, following the Presidential Decree n°117 and the path towards a referendum on a new constitution that permanently destroys what the country has achieved in the past years in terms of activating rights and freedoms and democratic values; Especially since the new draft constitution, which will be submitted to a referendum on the next 25th of July, has cancelled the chapter that stipulates the civil state. While Chapter 5 of the draft constitution states, “Tunisia is part of the Islamic Umma, and it is incumbent on the state alone to work to achieve the purposes of Islam (Maqasid Al-Shari’ah) in preserving the soul, honor, property, religion, and freedom.”. In addition to restricting the practice of religious rites on the pretext of « maintaining public security » and emphasizing that the Tunisian state must consolidate Islamic and Arab values in young people and children. I think that this new path taken by the state represents a serious threat to the existence of religious minorities and their right to religious freedom and to practice their religious rites freely and peace.

By: Ghassen Ayari,
public relations and partnerships officer of Attalaki 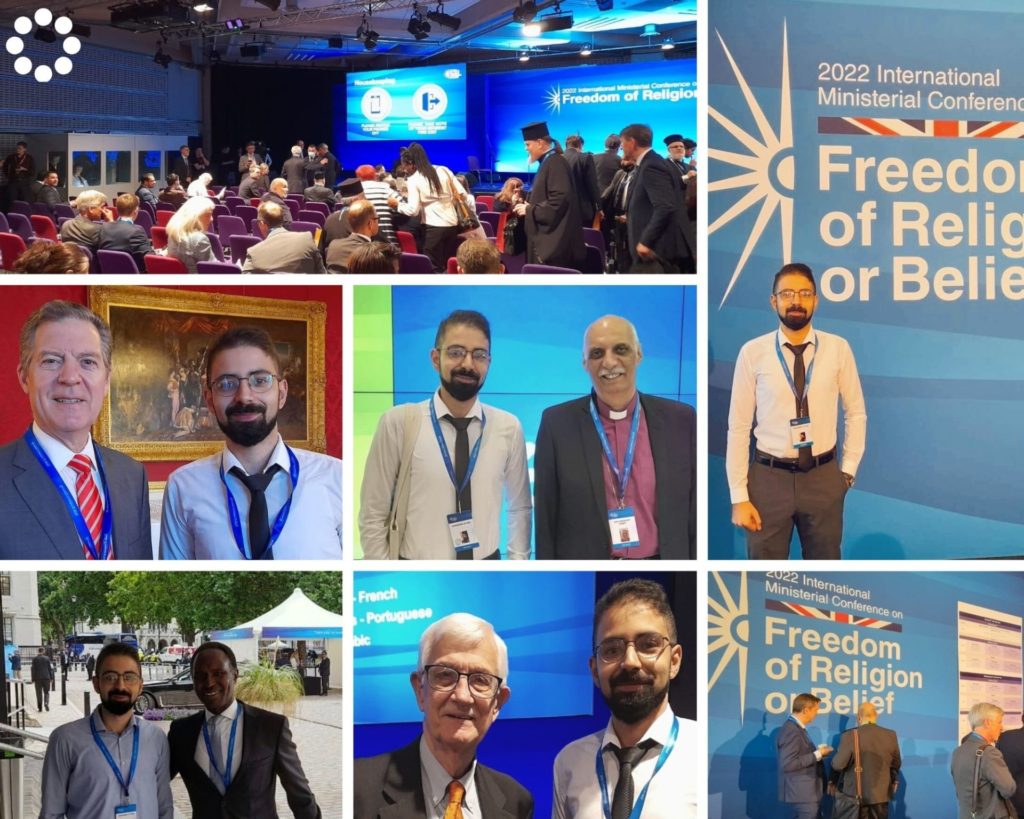